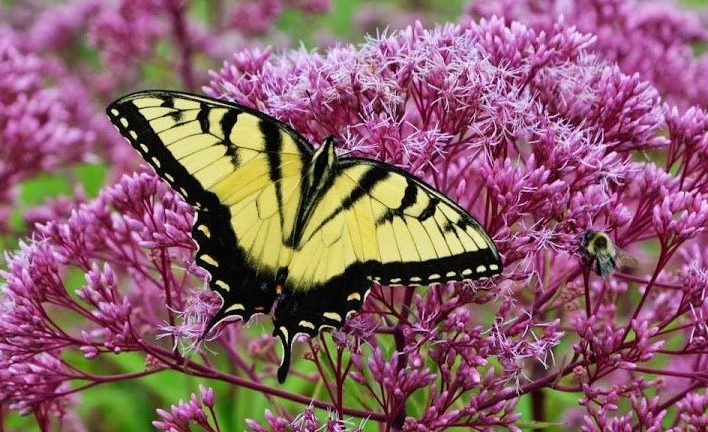 Eutrochium? That’s right! The Joe-Pye Weeds have a new name!

Joe-Pye Weeds are robust, statuesqeue perennials with broad, whorled foliage situated in layers along tall stems. In late summer, large inflorescences of numerous, tiny pink or purple flowers decorate the tall foliage. They are part of the aster family, Asteraceae. Like many members of the aster family, Joe-Pye Weeds produce tiny seeds, called achenes. These achenes are attached to a feathery pappus, allowing them to disperse by wind. Until recently, they were classified with bonesets, in the genus Eupatorium [sound familiar?] but now, the five Joe-Pye Weed species have been placed in their own genus, Eutrochium.

The name Eutrochium is derived from the Greek words eu (well) and troche (wheel-like). Troche is in reference to the wheel-like appearance of the whorled leaves. And the common name comes from a Native Shaman, named Joe Pye, who used this plant to concoct a cure for typhoid fever that was ravaging Colonial New England.

Joe-Pye Weed in the Ecosystem

Generally, these plants are commonly found in wetland habitats such as wet meadows, stream banks, roadside ditches, low woodlands, coastal marshes, and fallows. Depending on species, their ranges in the United States may extend from New England south to Florida and west to the Texas, with exception to Spotted Joe-Pye Weed (E. maculatum), which is the only species to grow in the western US. Of the five recognized species, four of them occur naturally in Pennsylvania; only one species, the Appalachian Joe-Pye Weed (E. steelei) does not, growing only in the southern Appalachian Mountains.

Joe Pye Weeds are incredibly valuable to a wide array of insects, especially pollinators such as bumblebees, bee-flies, butterflies, skippers, and moths. The larvae of the Pearl Crescent butterfly (Phycoides tharos) feed on Joe-Pye. Many other beneficial insects such as leaf hoppers, beetles, and various gnats also utilize Joe-Pye Weeds, and provide food to predatory insects such as wasps, as well as insect-eating songbirds. Birds, in general, benefit from Joe-Pye Weeds, as their density and size provides essential cover and habitat for a myriad of species. Many smaller bird species, such as finches, may feed on the tiny seeds of Joe-Pyes in late summer and into autumn.

Because of their great size and large, strong root systems, these plants are valuable along waterways and buffer strips to prevent erosion and utilize run-off. They, along with other plants that share their habitats, keep our waterways clean and secure.

Joe-Pye Weed in the Garden

Because they tend to be large, these plants are usually planted as a background in perennial gardens, but may be used in place of shrubs as well. They are perfectly suited to rain gardens, swales, and water margins such as pond edges or stream banks. One can even plant Joe-Pye Weed in their pond, simply by keeping the top of its pot level with or slightly above the water surface.

Most of the species prefer full sun and fertile, moist to wet soils, though all species tolerate part shade and average-moisture soils that never become too dry. Soil can range from slightly acidic to neutral. Soft mud or clay soils are also acceptable for Joe-Pye, though these areas should not become too dry. They are suitable for roadside plantings, because almost all species are very tolerant of road salt. Of course, there are exceptions, which we will take a look at next. In general, deer do browse Joe-Pye Weed, but often nipping fresh growth in spring. This browse, if limited to spring or early summer, will just cause the plants to be shorter when in bloom.

Here, we will take a look at each species of Joe-Pye Weed we grow. Accompanying a summary of each will be some photographs and a JPEG version of our signage! You could skip the wordy sections and just look at the photos and signage if you prefer a shorter read. 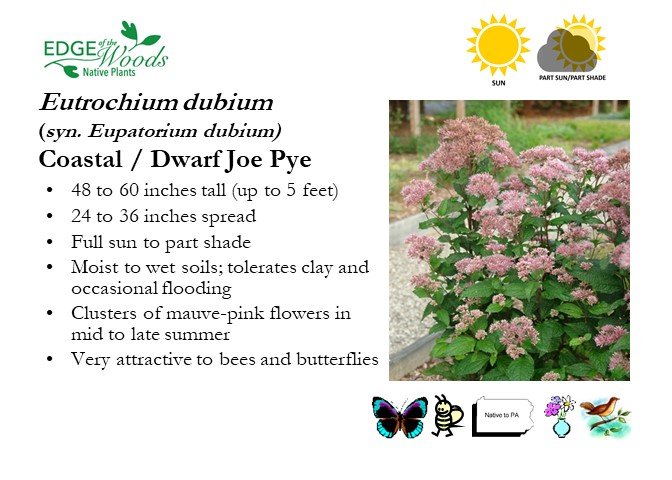 Coastal Joe-Pye Weed, as the name suggests, is found in marshes and coastal plains along the Eastern Coast from Maine south to South Carolina. In Pennsylvania, it grows in a few south-eastern counties, including Lehigh County! Naturally, this is the shortest of the species we grow, usually only growing four-to-five-feet-tall and two-to-three-feet-spread. This species remains a favorite of many gardeners and breeders selecting new varieties because of its shorter and more compact stature, allowing for its use in smaller gardens and even large containers! This smaller size led to its alternative common name, Dwarf Joe-Pye Weed. While four to five feet may not sound very small to you, keep reading, and you will understand what we mean! 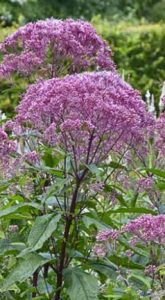 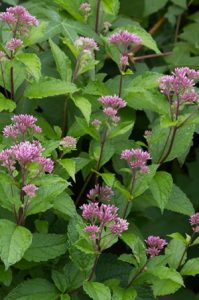 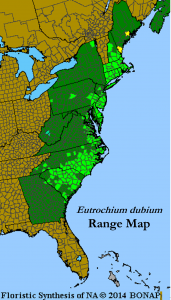 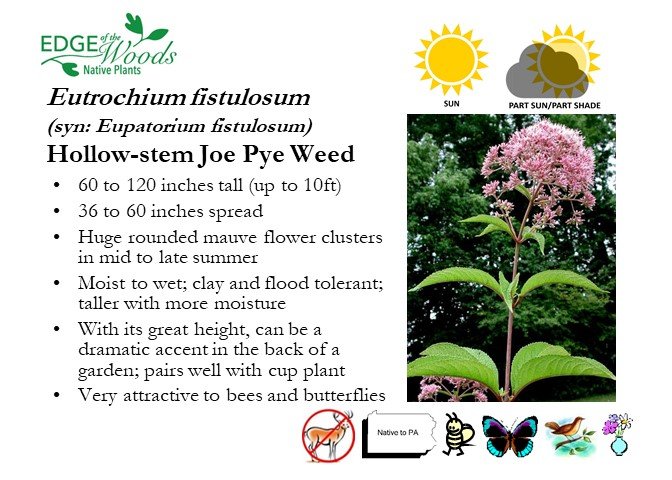 Hollow-stem Joe-Pye Weed is the largest species we carry, growing up to ten feet tall! It is the most common Eutrochium in Pennsylvania; currently found in all but a few counties. This massive perennial is truly striking, almost daunting as you admire the scale of its form. Though very tall, and hollow-stemmed, this species is still remarkably strong and resists flopping. Hollow-stem Joe-Pye makes for a wonderful backdrop or screen! A stand of it can function as a hedge in summer months. Another name for this species is trumpetweed. This name is in relation to its bloom time in late summer, as if heralding the waning days of summer. This tends to be the most deer resistant species of Joe-Pye Weed as well! 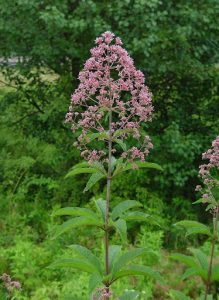 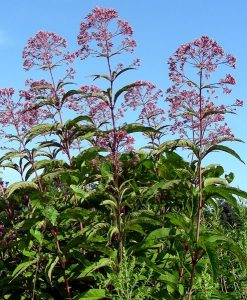 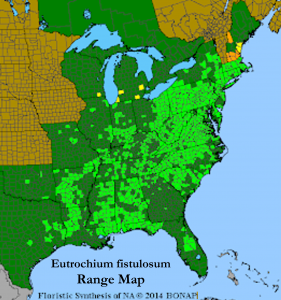 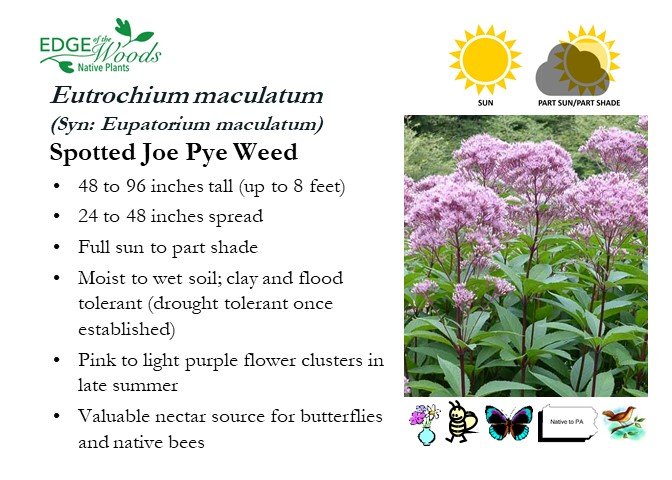 Spotted Joe-Pye Weed is the furthest ranging of all the Joe-Pye Weeds, with its range in the US extending from Maine south to Georgia, west to Arizona. often considered to be the most ornamental species, considering its dark stems that contrast with its soft green foliage and bright pinkish-purple clusters of flowers in late summer. In general, this species averages five to six feet tall. This plant is also quite adaptable, often requiring less moisture than the prior species, though appreciating it just as much. It can grow in average-moisture soil, and once establishes itself, is fairly resistant to drought.

Photos and range of Spotted Joe-Pye-Weed: 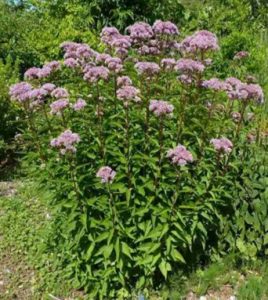 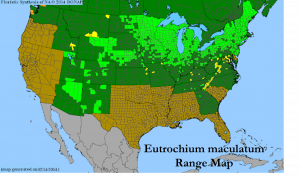 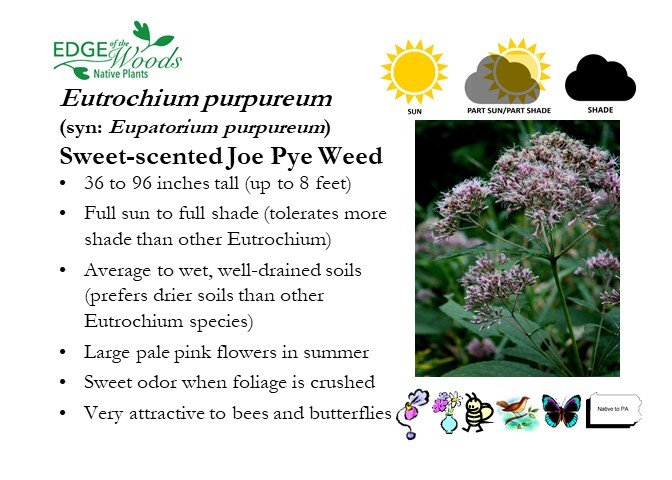 Sweet-scented Joe-Pye Weed is probably the most “unique” species we grow in that, unlike the other species of Eutrochium, it comfortably grows in average soils that occasionally become dry. It also does very well in full shade, whereas others do not thrive or become floppy in too much shade. Open woodlands are perfect for this species, though full to part sun, and wet soils work just fine! Another unique attribute of this species is its pale flowers and aromatic foliage. The height of this species is especially variable, ranging from just three feet but possibly up to eight feet tall. The amount of moisture and richness of soil will ultimately dictate the mature size of the plant in your garden. 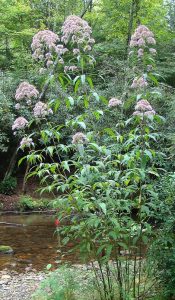 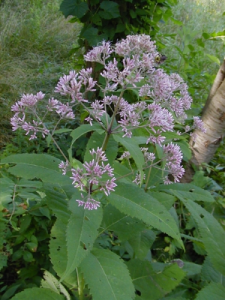 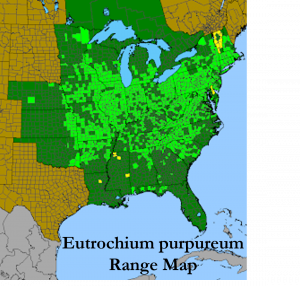 I just LOVE Edge of the Woods!!! What wonderful people and great plants, thanks for working so hard to give us a place of peace and enjoyment.