Mountain Mints – A Must Have.

One in a series highlighting our favorite pollinator plants:

Mountain mints are botanically classed as Pycnanthemum species. They are some of the absolute best plants for attracting and supporting pollinators in your garden.  All day long, when in bloom, a patch of mountain mint literally “buzzes” with the sound of active pollinators.  A spectacular variety of butterflies, bees, wasps, moths, and other beneficial insects cover the blossoms from sun up to sun down. They also attract important predatory and parasitoid insects that prey upon pest insects.  It is such a fun plant to observe, and watch all of its faunal associations unfold before your eyes. Like Nat Geo Wild in your own backyard!

In bloom for about 8 weeks in the summer, these mints provide endless entertainment for the watchful gardener and enough nectar for all who alight. There are several species of mountain mints native to Eastern North America, with about 8 species occurring across Pennsylvania.  We grow 5 species here at Edge of the Woods.  All mountain mints, like true mints, are deer resistant due to their aromatic nature.  Rarely do deer, rabbits, groundhogs, or voles browse mountain mints, and if they do, they are done after a nip or two when they realize its not their “cup of tea”!  While they are not as pungent as the true mints, such as culinary peppermint or spearmint, mountain mints are certainly useful for herbal teas, tinctures, and salves. Historically, mountain mint flowers were used to treat tooth aches.

A Look at Different Mountain Mints

All of the mountain mints generally prefer full sun to part shade, and most are very adaptable. Preferred soils for mountain mints include average to moist, well-drained, fertile soils; though most will perform just fine in dry soils or even in clay soils as long as water doesn’t pool there. All are robust, upright plants, though their habits may differ in the garden.  Some are clumpers and others are spreaders. Clumping species, such as P. incanum, are generally considered “well-behaved” compared to the spreading species, such as P. muticum, which requires more space for the rhizomes to spread. The spreading species are excellent plants to use as taller groundcovers, while clumping species are easily tucked between other perennials!

The flowers and foliage, species to species, vary considerably. Foliage textures range from fine, needle-like leaves, such as with P. tenuifolium, to the large, broad foliage of P. muticum; some species also sport a silvery-colored foliage, such as P. virginianum and P. incanum. Flowers are almost always white or creamy in color, but their arrangements on each species varies from the next. P. virgnianum and P. tenuifolium have showy, tight clusters of white flowers atop of their fine foliage. P. muticum and P. incanum have small, sparse blooms that are set within large, showy, silver bracts (modified leaves) which help draw pollinating insects. Finally, P. flexuosum has large individual flowers in loose clusters, appearing almost prickly. Continue reading to learn more about each species, and how you can utilize them in your gardens and landscapes. The pollinators are waiting! 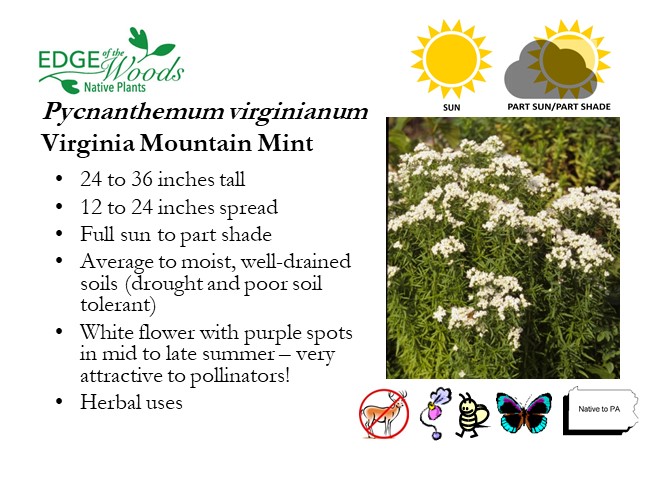 This easy-care, deer resistant perennial is a must-have for any pollinator garden. We love the fine foliage of the Virginia Mountain Mint, and its spicy-minty aroma! One of the showier “bloomers”, it sports white flowers that rise above lower plants, creating a ‘mist’ of white — an enchanting effect in the moonlight.  This species is highly aromatic, you can smell its minty scent when you brush past it.  Its leaves can be used in herbal teas or dried for savory dishes (similar to oregano).

Virginia mountain mint tends to grow 2 to 3 feet tall and spreads up to 2 feet. While considered a spreading species, it certainly does not tend to spread too far or become aggressive. Tolerates almost any soil, except for those with poor drainage. Handles drought like a champ and tolerates harsh, sunny exposures. 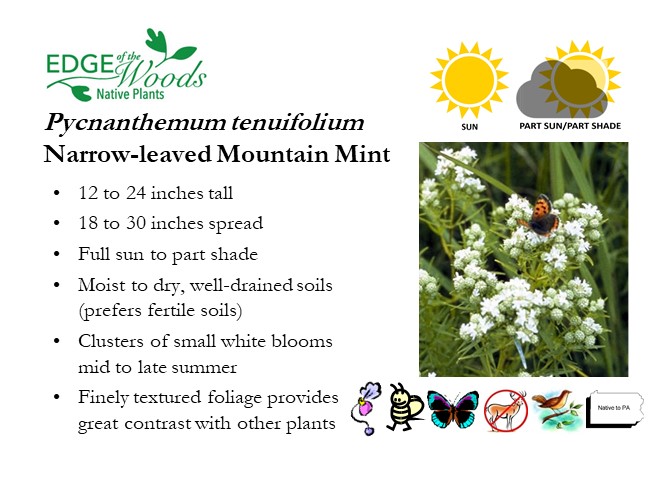 This is a really cool mountain mint species! Narrow-leaved Mountain Mint is a very attractive plant, with its super finely textured foliage, upright clumping habit, and misty white flowers that decorate the plant for about 2 months starting in early summer. Bees, butterflies, and other pollinators adore this plant. Comparably, it does not have much aroma when crushed, very subtle. However, it is still just as deer resistant as the rest of the genus.

Plant this species in an area with full sun to part shade (does seem to appreciate shade during the hot afternoon). Narrow-leaved Mountain mint prefers average to moist, well-drained, fertile soils. It will tolerate drought, but may wilt if without water too long. Perfect compliment plant for coneflowers, warm season grasses, and phlox! 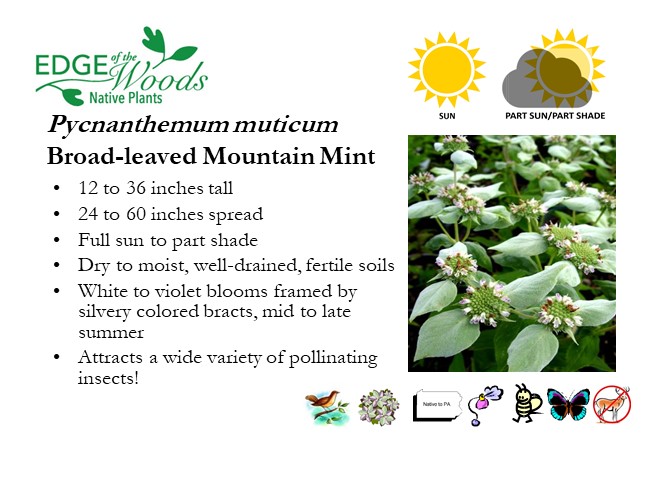 Everyone loves Broad-leaved Mountain Mint, including the bugs!  This species is considered THE BEST mountain mint for attracting and supporting pollinating insects!  The leaves surrounding the flower are highlighted in silver; these modified leaves are known as bracts and serve to visually lure insects.  Consider planting this species at a convenient spot in your garden so you can watch the diverse array of insect visitors!  The bloom season lasts a good six to eight weeks.  Good for cut flowers, cottage gardens, mass plantings and perennial borders.

This one is a spreader…probably our “spreadiest” species. It will spread by rhizomes to form a small colony, usually at least 3 or 4 feet across, and often larger! While it is not especially “aggressive”, it could certainly outcompete smaller and less robust species. Consider pairing this with Monarda fitsulosa (wild bergamot), Echinacea sp. (coneflowers), Rudbeckia sp. (black eyed susans), warm season grasses, and Phlox paniculata (garden phlox). Broad-leaved mountain mint prefers full sun, but tolerates light shade; it grows in dry to moist, well-drained, fertile soils like the other mountain mints. Drought resistant as they come, and often very successful in spots where other plants fail. If you garden for pollinators, and you don’t have this species yet, step up your game and get some in your gardens!

This is also the “mintiest” mountain mint we grow! Would be perfect for herbal tea, desserts, potpourri, (…or a mojito this summer!!) 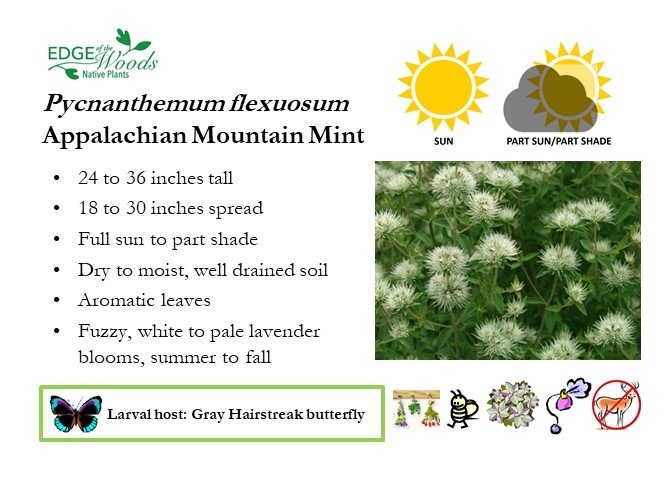 Appalachian Mountain Mint is quite showy, for their flowers are somewhat larger than those on other species. Another clumping species, plant this one without fearing an aggressive spread. Like the other species, flowers hold up for a long time, and the plant blooms for at least 6 weeks, and up to 8 weeks continually. If you have a particularly dry spot, this might be a great choice for you! Appalachian mountain mint requires well-drained soils, and tolerates poorer soils than some of the other species of mountain mints. Perfect choice for cottage gardens and water-wise, low-maintenance landscapes.

Aroma on this species is good, you will catch a whiff just working around it in the garden. All it takes is to brush against it to release the aroma. Its foliage is smaller than the broadleaf mountain mint, but not as thin as the Virginia or narrow-leaved species. Makes for a nice complimentary foliage with earlier blooming plants such as Coreopsis lanceolata, Monarda bradburiana, and Phlox glabberima. 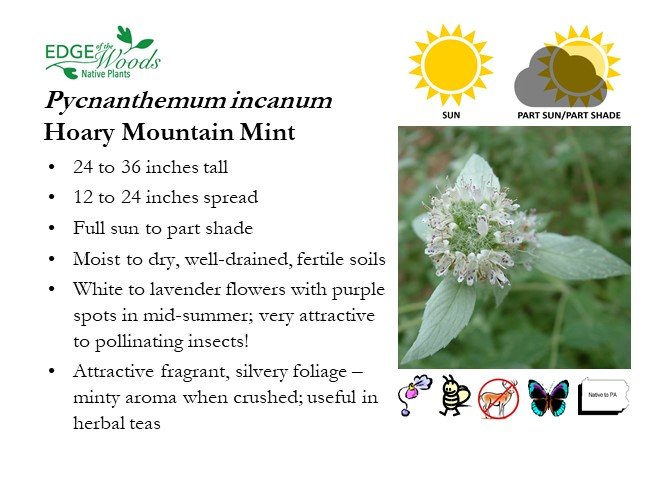 Oh, last but not least, the Hoary Mountain Mint! No, it isn’t promiscuous…its silver! Hoary, in botanical language, means greyish-white or silver. The foliage of this plant is a soft, silvery-green and sports silverish bracts similar to those on the Broad-leaved Mountain Mint. Very attractive among other perennials, even when not in bloom. This species has a medium rating of aromatic qualities, and is useful for herbal teas.

By this point, you know the drill…full sun to part shade, and average to moist, well-drained, fertile soils will suit this mint just like the rest! And yes, the Hoary Mountain Mint is superbly drought tolerant and will thrive in drier soils as well. Tolerates clay but not so heavy that drainage is poor. It can grow in poor, nutrient-depleted soils, but will be shorter and less productive than if it were grown in richer, moister soils. Another long bloomer — up to 8 weeks. Sometimes the Hoary Mountain Mint will also develop some reddish color in its foliage after blooming if grown in intense sun.