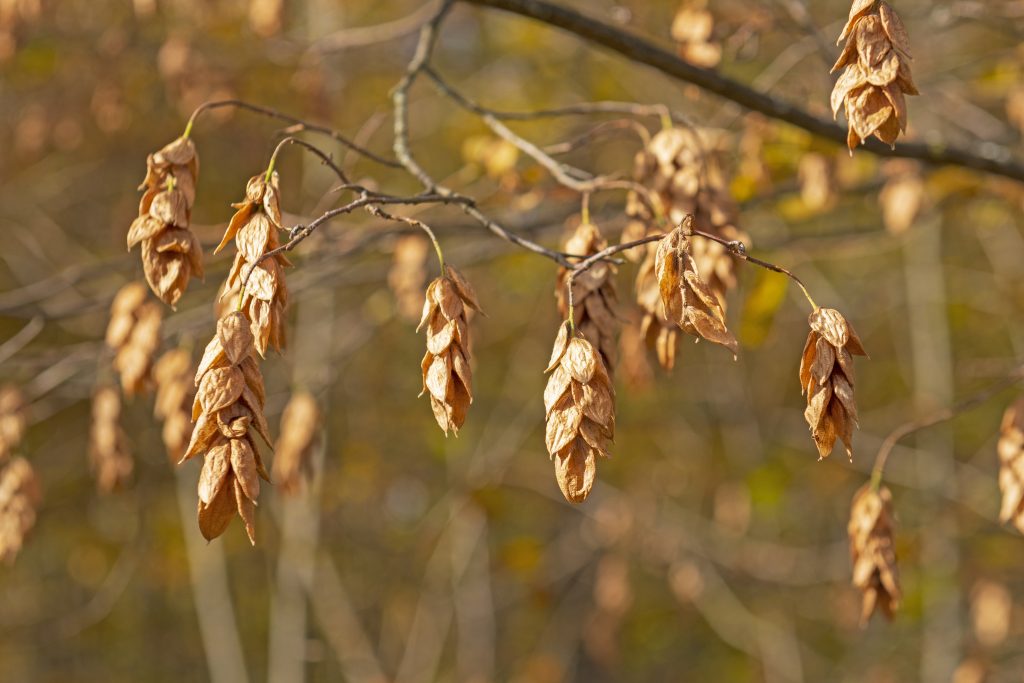 The American hop-hornbeam is a great tree for the garden and landscape! Unfortunately, landscapers and home gardeners overlook this beautiful tree as it can be difficult to find in cultivation. We believe this tree is more deserving of horticultural merit considering its hardiness, adaptability, and optimal size for most home-owners. Not only an appealing tree for the garden but is an important member of our native woodland biodiversity. Please consider the American hop-hornbeam for your own garden or landscape!

This attractive, small to medium sized tree generally grows 20 to 30 feet tall with a spread of 10 to 20 feet. Some old specimens reach heights of 50 feet plus. It tends to have a single trunk and a broad but open canopy. However, in the landscape, this species generally begins with a narrow, somewhat conical shape and maturing to have a very dense and broad, oval-shaped canopy. Due to its smaller mature height and general stature, the American hop-hornbeam is a fantastic choice for a street tree. Thankfully, more and more municipalities are adding this species to their “approved” list of street trees.

The foliage is a soft green, and reminiscent of birch leaves. Its smaller sized leaves are ideal for those of you who prefer “tidier” trees with less litter in the fall. As a young tree, its bark is smooth and grey in color, though once the tree matures its bark becomes darker and somewhat shaggy, appearing plated. The bark is a dependable way to distinguish this tree from its close relative and look-a-like, the American hornbeam (Carpinus caroliniana). While the bark of the Ostrya becomes rough and shaggy with maturity, the bark of the Carpinus remains smooth and grey in color. As its common name “hop-hornbeam” suggests, the fruit is reminiscent of hop flowers and are quite charming (see featured image). The papery, hop-like fruits start off green and turn to a tawny brown as the season progresses, adding interest all season long.

Fall foliage is variable, though most often rich with golden yellow and orange. Flowers emerge in the early spring in the form of separate male and female catkins on the same tree but are not considered showy.

In nature the American hop-hornbeam is generally found on rocky slopes and understories of acidic, upland forests among oaks, pines, birches, and historically chestnuts. The range extends from South-eastern Canada, west to Wyoming, southeast to Northern Florida and west to Eastern Texas. It is naturally found in almost, if not every state east of the Mississippi and a few Mid-western states east of the Rockies. There is also a disjunct population, often recognized as a subspecies, scattered across Mexico and Guatemala; some taxonomists list it as a distinct species.

The American hop-hornbeam provides unique habitat for a variety of other organisms because of its niche as an understory tree. Understory trees and shrubs are an important part of forest ecology. Plants that form this kind of sub-canopy provide cover and food for ground-dwelling mammals and gamebirds, as well as songbirds, reptiles, amphibians, insects, and spiders. Without such species, the understory can be rather bare or stricken with invasive plants.

Both the red-spotted purple and Eastern tiger swallowtail butterflies occasionally use Ostrya as a larval host, as do several moth species such as the walnut sphinx. Ground birds such as ruffed grouse and wild turkeys eat the buds of the tree as a winter food source. Nutlets (seeds) are consumed by a variety of birds including woodpeckers, nuthatches, and quail, as well as numerous small mammals. Interestingly, the tree’s gnarled growth and common occurrence of witches’ brooms provides an intricate network of branches with jagged bark that provides habitat for invertebrates of all kinds.

American hop-hornbeam wood is extremely hard and durable, hence its other common name “ironwood”. Historically the wood was used to make sleigh runners, plane soles and other tools. It is still in use for the making of fenceposts and handles. Because of its resistance to compression, the wood is useful for fashioning longbows. Unfortunately, due to its common occurrence to have gnarled or twisted trunks, it is generally considered a “scrap tree” by foresters.

Native Americans treated various ailments including sores and aches with the inner wood.

Of course, the American hop-hornbeam also makes a fantastic ornamental tree, with few disease concerns and virtually no pest issues.

As mentioned, this species makes a fantastic choice for a small to medium sized tree in the home landscape. Ideal placement would be in full sun to light, dappled shade. Soil should be slightly to moderately acidic, though the tree can likely tolerate soils with a neutral pH. Though moist, well-drained soils are ideal, the American Hop-hornbeam is very adaptable and can tolerate dry soils once established. Growth rate tends to be slow, but can be faster in soils with that are richer in nutrients and appropriate amounts of moisture.

We generally have the American Hop-hornbeam in stock at Edge of the Woods, available as container plants. In 2022, we will have container specimens available that are approximately 4 to 5 feet tall. We hope you will consider adding one to your garden, landscape, or natural area this season! See you in spring!

I love this place. The staff are the most helpful and knowledgeable. Native is the way to go with landscaping and this is absolutely the best place to purchase plants. I am definitely addicted to this place