Bur Oak is a medium to large species within the “white oak group” and is one of the stateliest trees in North America. Though most common in the American Midwest,  its most dense populations are in the Great Lakes region and northern part of the Mississippi River. However, its range extends as far west as Montana, south to Texas, and east to Alabama and follows along the northern face of the Appalachian north to Maine and extending into several Canadian provinces. It does not occur in the Carolinas, Georgia, or Florida. Throughout its range, this species occurs in moist, low woodlands, and savannahs.

This species most commonly grows 60 to 90 feet tall and wide at maturity but has been recorded surpassing 150 feet tall. A typical member of the white oak group, the Bur Oak’s crown is rounded and broad. Its name comes from the acorn cups, which look like prickly burs; the cups’ mossy appearance has also given this species the other common name, the Mossycup Oak. These unique acorn-cups along with its ridged, corky bark can help in identifying this oak from other close relatives.

It also has the largest acorns of any oak, making it distinguishable. The Bur Oak is easy to grow and is best planted in moist, well-drained soils in full sun or dappled shade. It is tolerant of poorer soils but will thrive in rich soils. Plenty of space is needed for the tree to grow into its typical, majestic shape, so proper placement is necessary. Young trees should be caged to protect against deer browse and buck rubs.

Like other oak species, the Bur Oak has remarkable value for wildlife. It serves as a larval host for several butterflies, including many Hairstreaks and Duskywings, as well as for hundreds of species of moths. And of course, the acorns are a relished food source for a myriad of native mammals such as squirrels, chipmunks, flying squirrels, deer, foxes, bears, white-footed mice, raccoons, and many birds such as woodpeckers, ducks, grouse, quail, pheasants, turkeys, and nuthatches. Many forest-dwelling birds also use this species for nesting such as screech owls, flycatchers, tanagers, hawks, and vireos. The acorns can also serve as a supplemental food for domestic animals such as cattle and swine.

Our Bur Oaks are 3′-4′ and will fit easily in your car.  The crop was seed grown for genetic diversity. 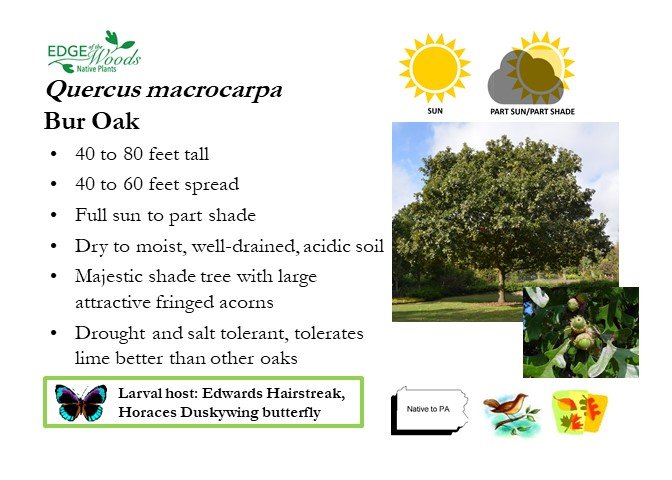 The staff are very friendly and knowledgeable. They will take the time to listen to your wants and needs and make recommendations. We go here for all our nursery needs.