Flowering dogwoods remain one of the most popular small trees for gardens and landscapes. Our native flowering dogwood, Cornus florida, is an early bloomer. In Pennsylvania, flowering dogwoods generally begin blooming from mid to late April through early May. In the landscape, flowering dogwoods tend to have a short, single trunk which branches low (creating the appearance of a multi-trunked tree). Mature trees most often have a broad-pyramidal form when grown in enough sun. They tend to grow 15 to 25 feet tall with an equal spread. Fall color is a fantastic red-orange to burgundy. Since it is an understory tree in nature, they will tolerate a lot of shade. Shade-planted trees have less blooms, taller trunks with higher branches, and a more narrow, spindly appearance. They are often seen in woodland edges or roadsides leaning out from the other trees to take advantage of the accessible sunlight.

The blooms of this tree are interesting, as they appear as large, white or pink, four-petaled flowers. However, those colorful “petals” are actually bracts, or modified leaves. These bracts aid in luring pollinating insects to the tiny cluster of actual, not-so-showy flowers in the center. The actual flowers are small, yellow structures that lack petals (see image below). A well-known example for flower structure comparison is the Pointsettia (popular gift  during the holidays); these plants have bright red bracts rather than flower petals. Most flowering dogwoods in nature have white bracts, but occasionally they can be pink or magenta.

Flowering dogwoods naturally grow in sloped, slightly acidic woodlands among oaks, sassafras, tulip poplar, sugar maple, persimmon, beech, and pines. However, they are also found in lowlands, often along streams or in flood plains where soil nutrients collect. Generally, it is not found on ridges or high slopes (not enough moisture). Sometimes, flowering dogwood is opportunistic in old, overgrown fencerows and thickets bordering farms and residential areas. Its native range extends from Southern Maine south to Northern Florida, west to Eastern Texas, and north to Ontario.

With its natural habitat in mind, dogwoods perform best when planted in rich, moist, slightly acidic to neutral, well-drained soils in full sun to part shade. Ideally, they should be positioned to receive morning sun and shaded by late afternoon to avoid sweltering heat in summer. You can expect the most flowers in full sun. Avoid planting close to the road, as they do not tolerate salt. It is best to plant them away from sidewalks and structures because they have shallow roots. Protect them from animal browse and buck rub when young. Because dogwoods are susceptible to powdery mildew and anthracnose, plant them in areas with good air movement.

Several native bees and pollinating flies are attracted dogwood blooms’ nectar and pollen including halictid and andrenid bees, as well as bee flies and syrphid flies. There are dozens of native insects that utilize the flowering dogwood as a food source including several aphids, leaf beetles, sawflies, flea beetles, several species of moth larvae, midges, borers, and spittlebugs. By supporting such a rich diversity of insects, this tree is excellent for supporting songbirds and larger predatory insects. The spring azure butterfly, Celastrina ladon, also utilizes the flowering dogwood as it is one of its larval host species.

Over 30 species of Pennsylvania-native birds, including ruffed grouse, quail, and turkey along with squirrels, chipmunks, mice, skunks, fox, raccoons, bears, and beavers feed on dogwood berries. Deer and rabbits will readily browse the foliage and twigs of young dogwoods (please protect from browsing animals when young).

Interestingly, flowering dogwoods improve soils for other plants through their leaf litter. Dogwood leaves decompose quickly, at a rate 3 to 10 times faster than other tree species found with them. The foliage is also very nutrient dense, containing immense amounts of calcium, magnesium, potassium, sulfur, as well as boron, iron, copper, manganese, and zinc. Because their leaves decompose so quickly, these valuable nutrients become readily available in the soil faster. It may take well over a year for leaves such as oak and sycamore to decompose, meaning the nutrients could take several years to become available for plants to use.

Keep in mind, Cornus florida is very similar to Cornus kousa (Korean/Japanese Dogwood). The Korean dogwood, often just called the “kousa dogwood”, is also a very popular tree in gardens and landscapes across the U.S. The kousa dogwood is generally not considered “invasive” in North America, though it may escape cultivation occasionally. Many people refer to both as “flowering dogwood”, which can make it difficult for novice gardeners to find the appropriate plant. The kousa dogwood, unlike the native flowering dogwood, flowers later, after its leaves emerge. Its fruit are also vastly different, as the kousa dogwood produces large, orange-red, bumpy fruits that hang on long pedicles as opposed to the small, red, smooth berries on the native species. See the comparison images below: 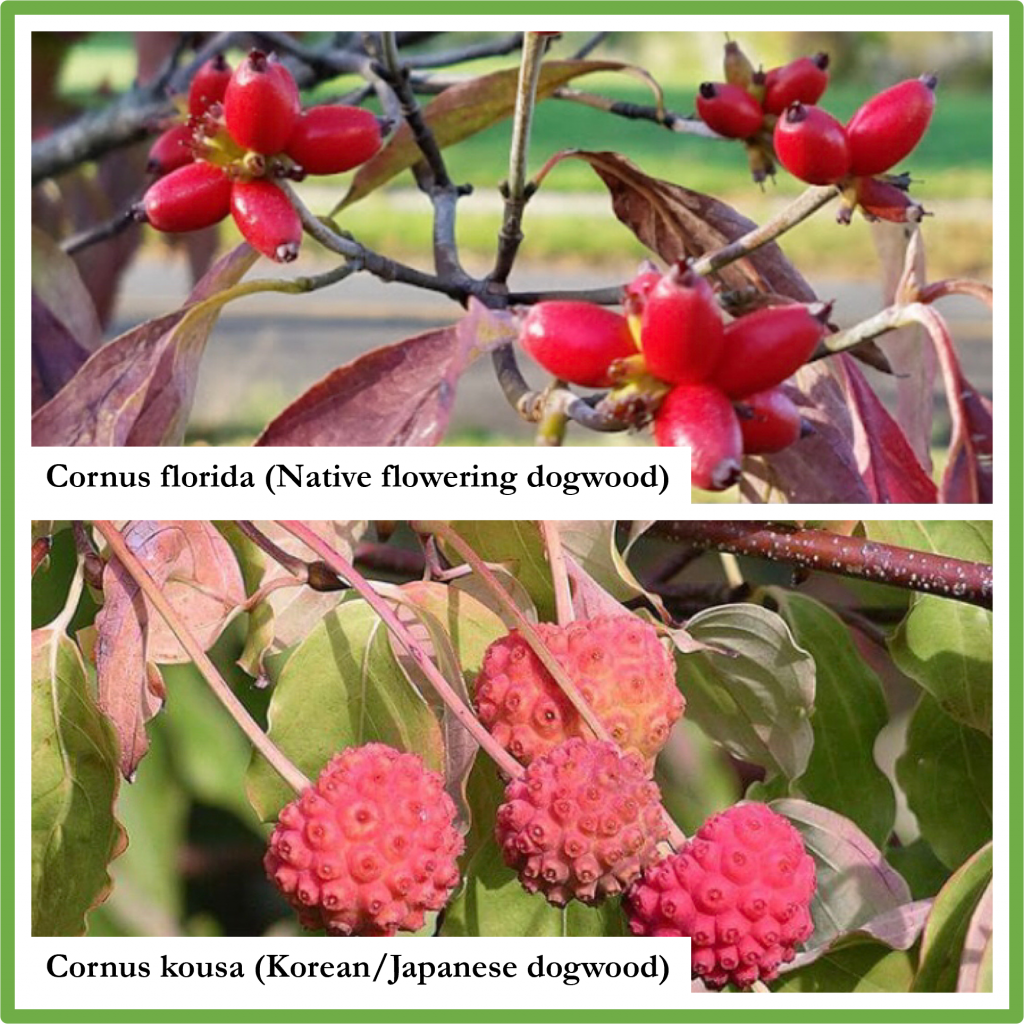 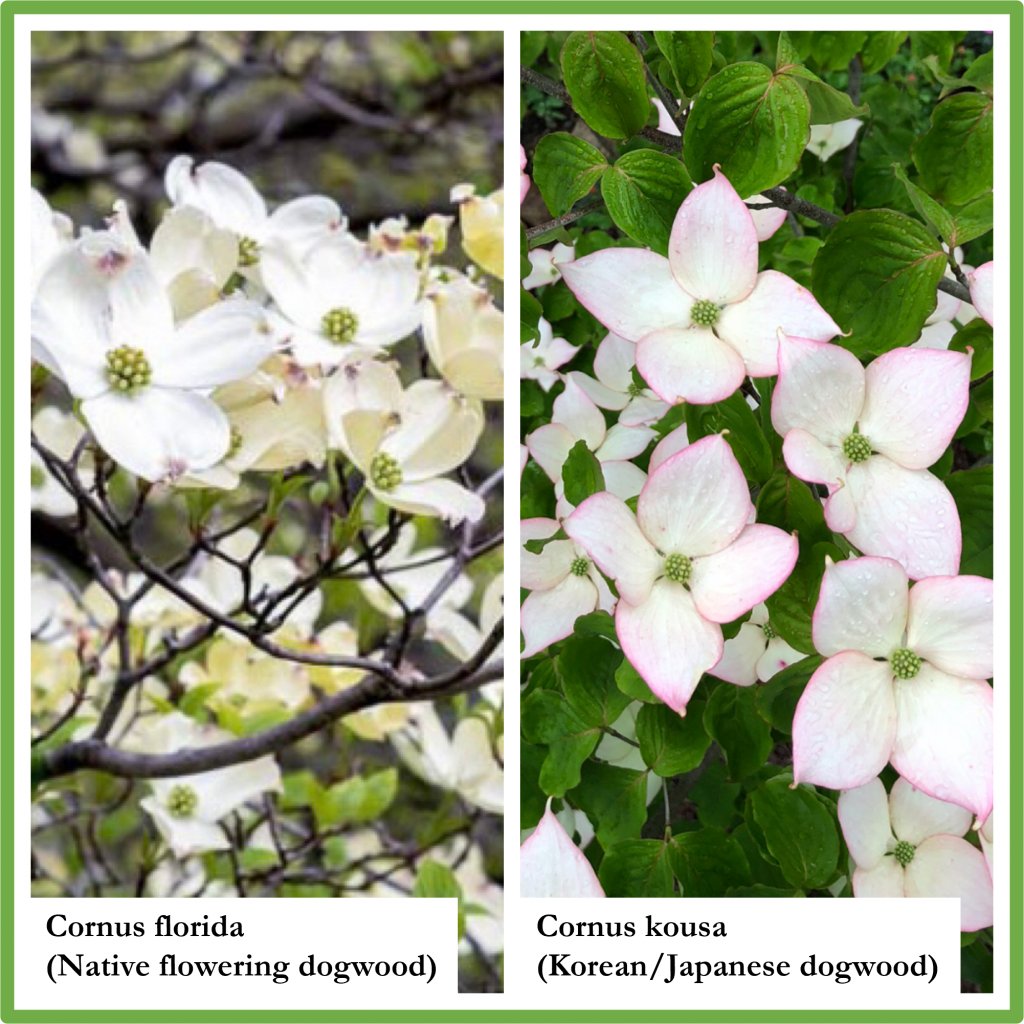 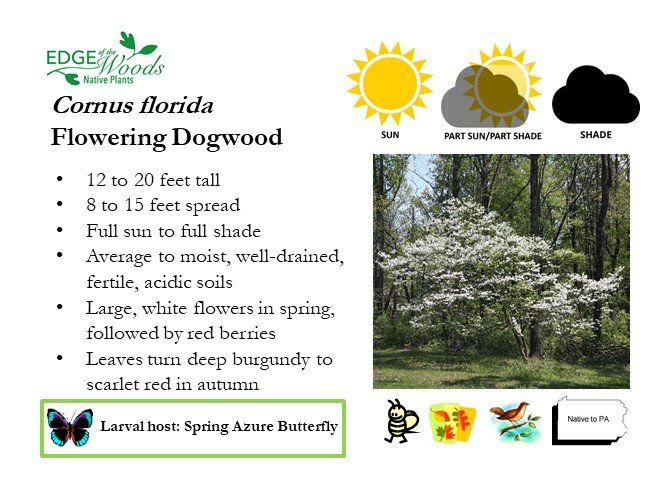 Edge of the Woods is an absolutely beautiful spot, with helpful staff all the way around, including recommendations for lunch venues!