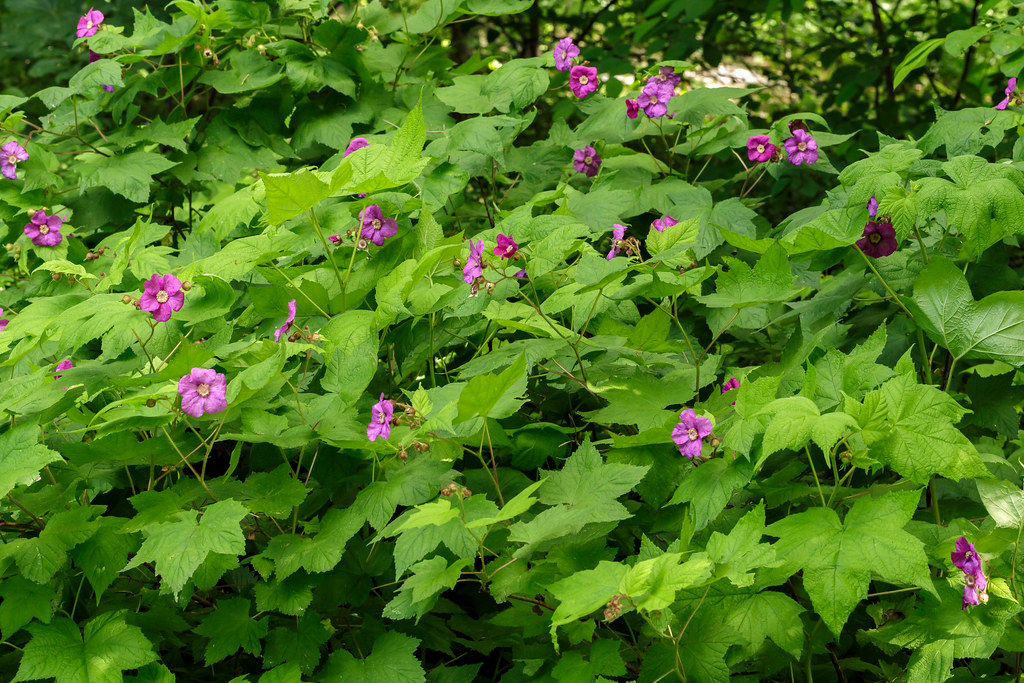 Did you know that there is a beautiful species of native raspberry with showy purple flowers? The purple flowering raspberry, botanically known as Rubus odoratus, is a large species of Rubus occurring in the forests and woodland edges of Eastern North America. The shrub grows 3 to 6 feet tall on average with a spread potentially reaching upwards of 12 feet. Like most Rubus species, it suckers freely to form a small colony. However, unlike so many other raspberries, this one lacks thorns! In summer, rose-purple, sweetly-scented flowers cover the shrub; blooming occurs from June to August, with fruits replacing the flowers as they fade. Though the cup-shaped, rather flat berries are edible, they are generally unappetizing and dry. The flat, cup-shaped fruits are what led to its other common name: the thimbleberry!

Flowering raspberry is fairly common in Pennsylvania’s woodlands, primarily growing in mountain forests, outcrops, and thickets. You can find it in almost every county, including Lehigh County! Sometimes you can spot it in bloom driving down back, wooded roads in the early summer. Because this species tends to spread and form colonies, it is an ideal candidate for restoration projects, fencerows, screens, and banks. On a bank, this species can act as a stabilizer, holding soil in place with its matted roots and rhizomes.

While the berries are not much value to humans, various songbirds, gamebirds, and small mammals love them. The flowers produce valuable nectar, attracting a wide variety of native bees and other pollinating insects. Some native bees also prefer this species to use pieces of the foliage for nesting material. The dense, thicket-like growth of a mature stand of this plant builds incredible habitat for a plethora of wildlife. It tends to be more deer resistant than other raspberries due to its large size, but deer may still occasionally nibble foliage or dormant stems in winter. Young deer may seek shelter in a stand of this plant, as its dense growth provides ideal cover.

This plant is extremely adaptable, growing in full sun to full shade; though partial shade seems to be its preference. It will perform best in moist, but well-drained, fertile, slightly acidic soils. Soil can be amended with compost and peat moss or leaf mold to give it the best conditions possible. It should never be planted in an area that is at risk of flooding or remaining saturated after rain events. This will cause rotting of the roots and crown.

Exceptionally healthy plants, well set out, clearly labelled, cheerful and knowledgeable staff. Recommend going here for all of your native plant needs. Great - I will be back