Looking for an easy way to add fall and winter interest to your landscape?  Native grasses are the answer!   Fall is a great time to plant them, and you’ll see their visual impact immediately.  To top it off, their ecological impact is far greater than their visual impact and goes beyond your own backyard.  They provide food and shelter in many different ways for insects, birds, and mammals.  Not to mention, they are all deer resistant!

During the growing season, many species of butterfly larvae (caterpillars) feed on the blade of native grasses.  In fall and winter, grasses provide protection and nesting material for birds, small mammals, and insects.  They are especially useful to the overwintering larvae and adults of beneficial insects.

Did you ever wander through a grassy are on hot sunny day and spend a lot of time waving you hand in front of your face because all the bugs were flying around?  That’s a good thing!  Grasses support a tremendous number of insects, which are essential to the ecosystem.

Below ground, the deep roots of native grasses provide more unseen ecological benefits.  They help stabilize the soil and reduce erosion.  About a third of the massive root system of native grasses is replaced with new roots each season.  As the ‘retiring roots’ decompose, they return nutrients to the soil, increasing its fertility.

There is one beloved insect in particular that benefits from native grasses – the firefly.  These nocturnal insects spend most of the day on the ground, concealed by long grasses.  At night, they crawl to the tips of grass blades and fly into tree branches to signal for mates.

If you intersperse tall native grasses in a tall perennial planting, they help hold the plants and heavy seed heads erect, so they don’t ‘flop’– allowing birds, pollinators (and you!) to spot them.  Planted in large groups or swaths, they provide a dramatic element and can serve as a dense screen.  Their golden fall color heralds the changing seasons.  Their tall seed heads sway in the wind,  adding movement to the still winter landscape.

Lower growing species such as Prairie Dropseed provide fine textured mounds and can be used as a specimen plant or filler.

Try any of the native grasses in containers. They will make a dramatic vertical statement and provide interest even when the rest of the container plants are dormant.  Dried grasses are an excellent addition to flower arrangements, too.

There is no need to cut native grasses back in the fall – their dormant blades and seed heads provide important ecological benefits.  If they start to flop or break under the weight of ice or snow, cut or trim for neatness sake if you wish.  In spring, cut back last year’s growth if you want them to look fresh and green throughout.  If not, it’s fine to let the dormant grass blades mix in with the new.

If you want to divide one of the clump forming grasses, do it in fall.  Cut it back so you can see the clump  Dig the clump out of the garden and use a sharp shovel, an axe or hacksaw to divide the clump into smaller pieces.  Replant immediately.

Bottlebrush Grass is one of the few grasses for part shade to shade. It will place itself in niches here and there, sending up its delicate seed head to mix with other flowers in your garden.  Widely adaptable.  The seed heads resemble bottle-brushes and rise 12”-18” above the foliage in mid-summer.  They slowly fade to tan throughout the summer and fall.

The caterpillars of Northern Pearly Eye butterfly feed on the leaves of bottlebrush grass, as well as larvae of many moths.

The Field Sparrow, Savannah Sparrow, Tree Sparrow, and Slate-Colored Junco enjoy the late season seeds of prairie dropseed through the fall and winter.  Use prairie dropseed and other tall grasses to create a  “no mowing” area for ground nesting bees.

There are several cultivars: 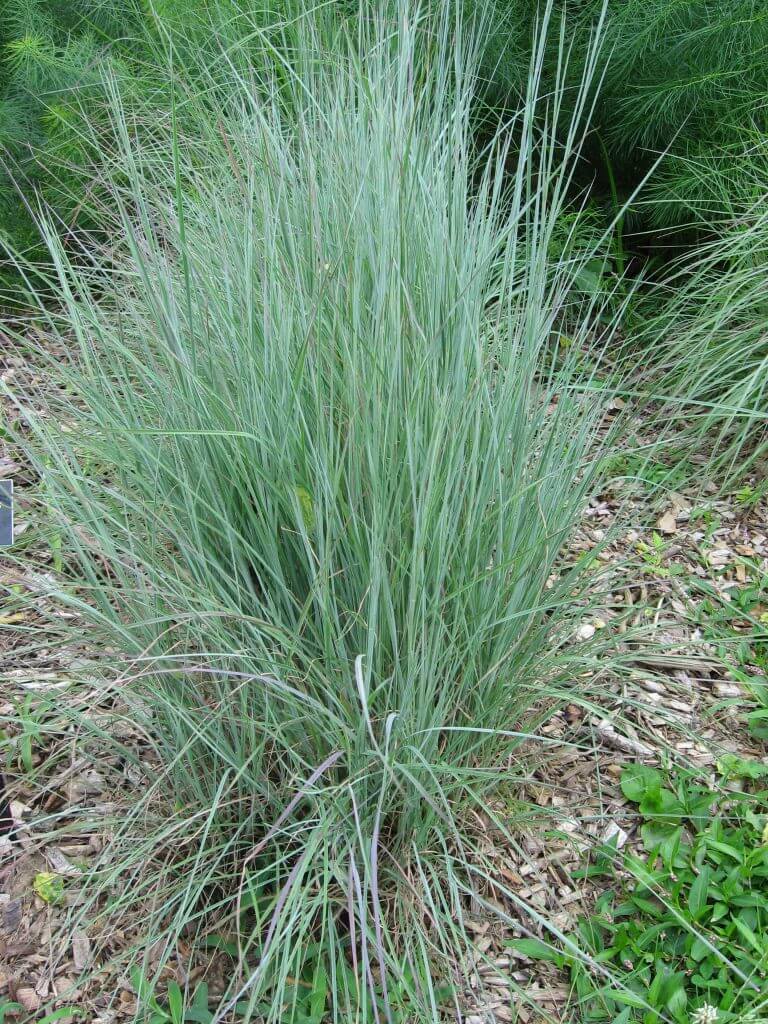 Soft blue color and gentle seed heads take on a slight reddish glow in the fall.  The selection  ‘Standing Ovation’  is known for its sturdy stems that don’t flop, and striking blue-green color with hints of  pink and purple turning to red and orange in fall.

Many grasshoppers feed on the foliage of Little Bluestem.  Here’s a list of all of them — who knew there were so many kinds!  And they are all an important source of food for birds.

The Field Sparrow, Tree Sparrow, Slate-Colored Junco, and other small songbirds eat the seeds, particularly during the winter.

This grass will spread aggressively.  It’s perfect for the area that you need to fill.  Nodding oat-like clusters of seeds dangle from the grass blades with a golden fall glow.  Good naturalizer for dry shade, where the lack of sun and moisture may keep is aggressive nature in check.  Northern Pearly Eye Butterfly and several skippers and moths feed on the foliage of Chasmanthium. 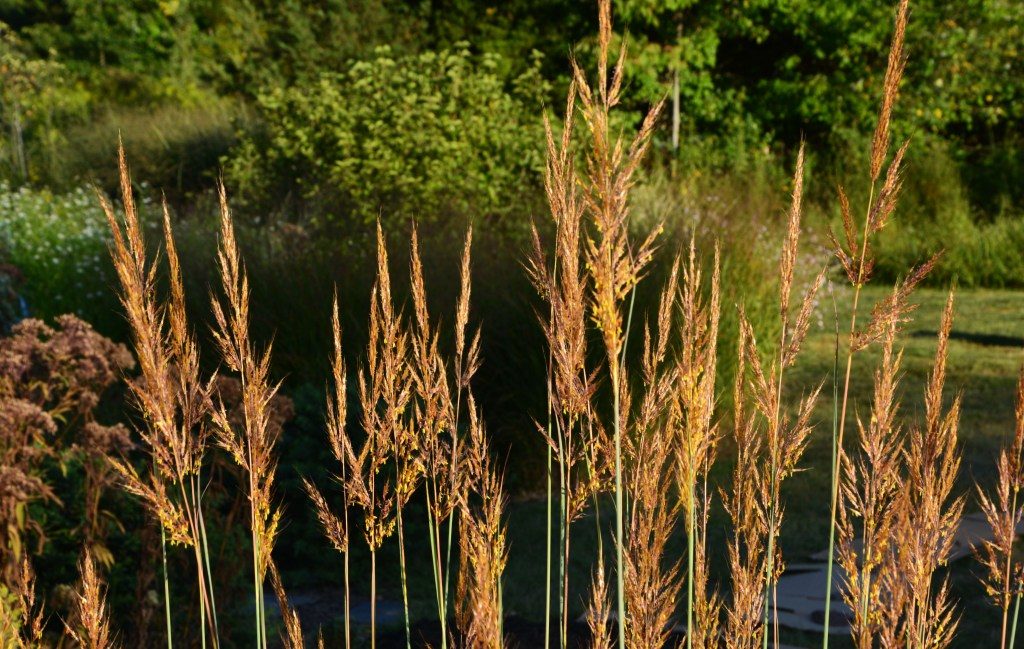 Several species of grasshoppers feed on the foliage of Indian Grass, including the wonderfully named Velvet-striped Grasshopper, Little Pasture Grasshopper, Handsome Grasshopper. These grasshoppers are an important source of food to many insectivorous songbirds and upland gamebirds. Because Indian grass is tall and stays upright, it provides nesting habitat and protective cover for many kinds of birds, including the Ring-necked Pheasant, Greater Prairie Chicken, Northern Bobwhite, Mourning Dove, and Field Sparrow. 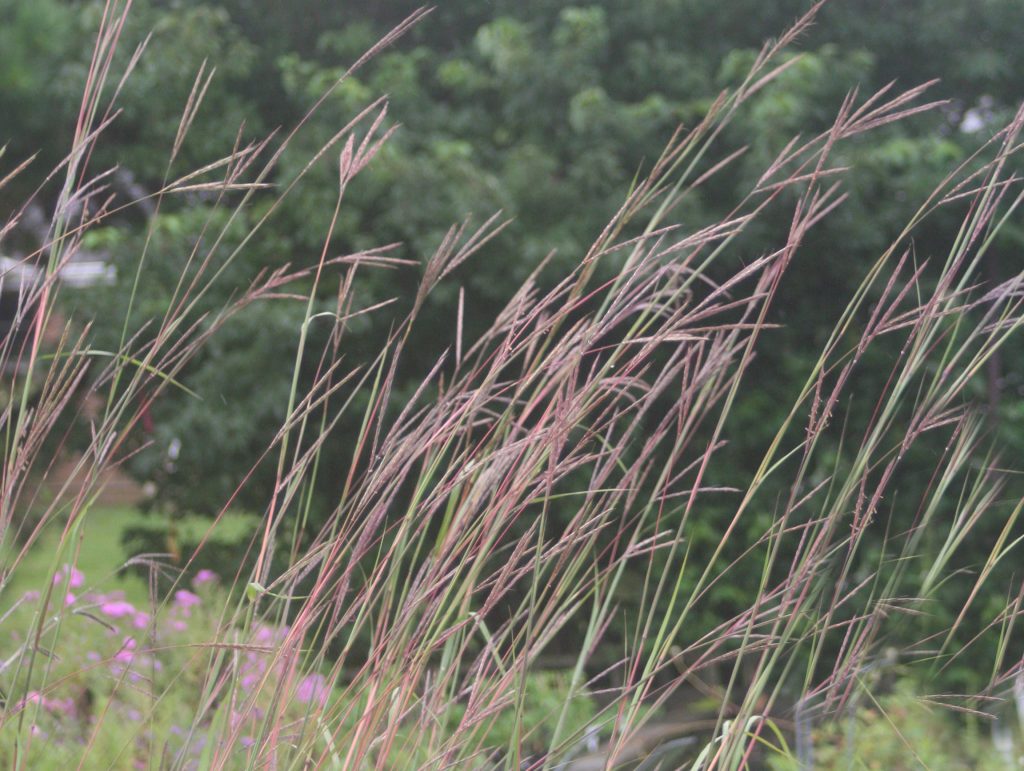 The king of native grasses with 3 fingered seed heads in August, and handsome gray to blue-green stems in spring turning to green in summer then to red in fall. Clump forming with excellent drought tolerance once established.  Big blue stem was once the most abundant grass in North America.  Now, corn crops occupy almost all the land that was previously Big Blue Stem prairie.   It’s leaves and stems are a lovely orange in fall, and its clumping nature allows room for other plants to mix in with it.

The caterpillars of several skippers feed on the foliage. Like so many other grasses, Big Bluestem is an important food plant of many grasshoppers, as well as the Meadow Katydid and the Short-winged Meadow Katydid. Field Sparrow, Tree Sparrow, and Chipping Sparrow will, at times, eat the seed of Big Bluestem. 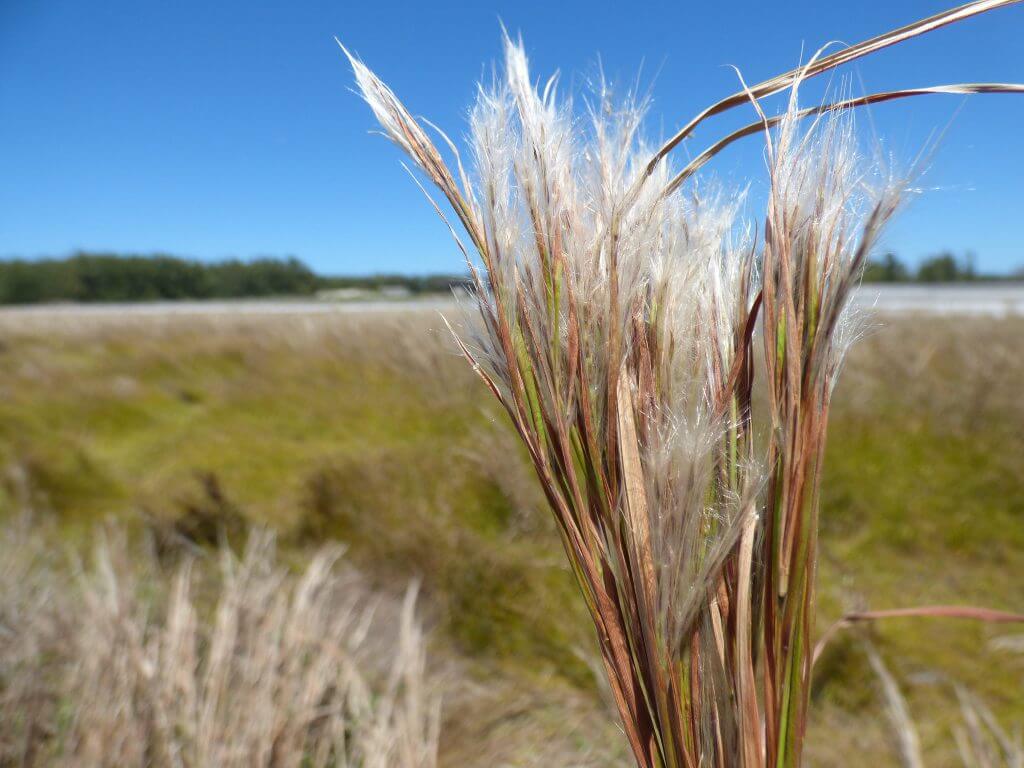 This grass will tolerate wet to moist soil! It, too, has a lovely orange glow in fall, topped with tufts of seed heads that look like cotton.  It grows 2′-6′ tall depending on the soil and the moisture. Usually on the shorter end of the range.

Seed of Andropogon glomeratus are eaten by birds and small mammals and are eaten in winter by prairie chickens, field sparrows, juncos, and other song birds. The grass itself provides nesting material for birds and cover for small animals.   It is the larval host for butterflies, skippers, and Satyrs. 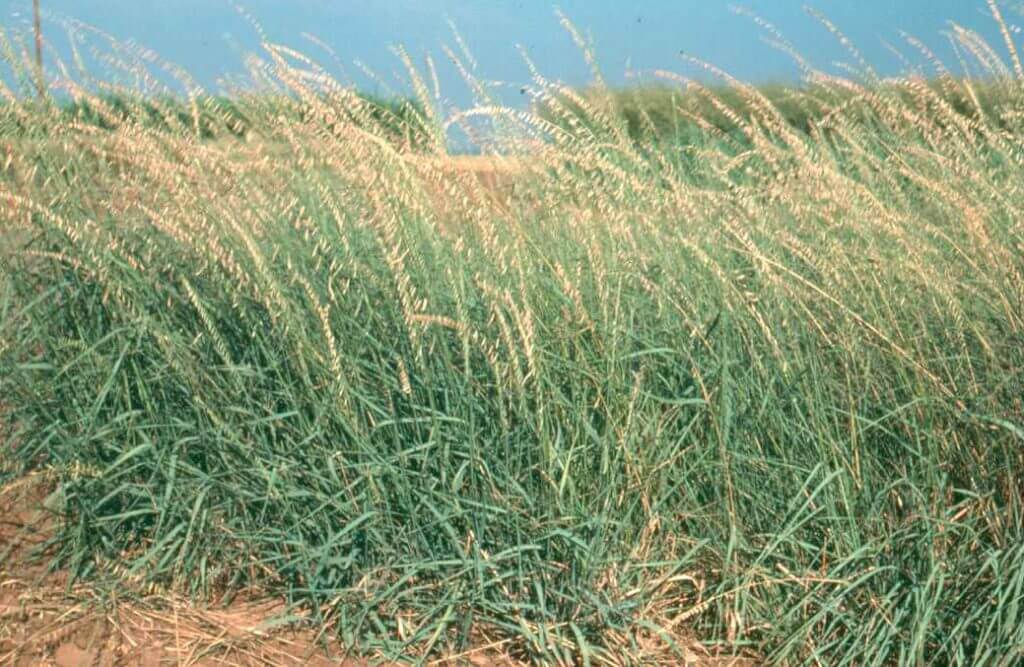 This is one of the shorter grasses, so you can use it as edging, in front of a border.  Plus, Sideoats has pretty flowers.  Drooping red anthers dangle from one side of the grass as it flowers, with little feathery stigmas float above.  Sideoats will tolerate moist to dry and prefers full sun.  Drought tolerant, it can grow in sandy or clay soil.  This is one of the few native grasses that can be mowed if desired and will stand up to light foot traffic.  If unmowed, a patch of sideoats will grow into foot high tufts.

This little-known grass supports a few specialist feeding leafhoppers. Specialist feeders rely solely on one plant for their food source. Without this plant, they have nothing to eat.  Many grasshoppers and other insects feed on this prairie grass. The larvae of Dakota Skipper, Leonard’s Skipper), and Ottoe’s Skipper also feed on it. Various birds are also known to eat the seeds of Grama grasses. 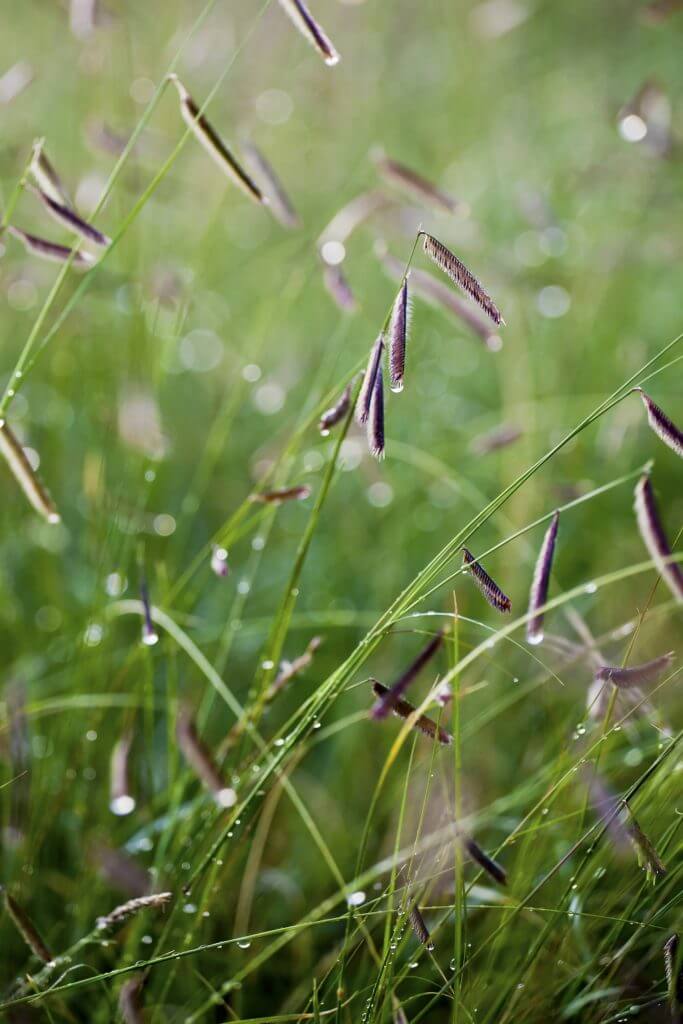 Very similar to Sideoats in it size and culture.  In dry soil, the plants will remain bunched.  If there is moisture or irrigation, it will spread via underground rhizomes to make  a solid mat.  An excellent choice for xeriscaping.  Like Sideoats, the most striking feature is its flowering structure.  As described by William Cullina “The flowers cluster together like silvery green toothbrushes held perpendicular to the stem.  As they go to seed, they curl back on themselves the way some caterpillars will when antagonized.”

Blue Grama supports similar insects and birds in the ecosystem as its relative Sideoats. 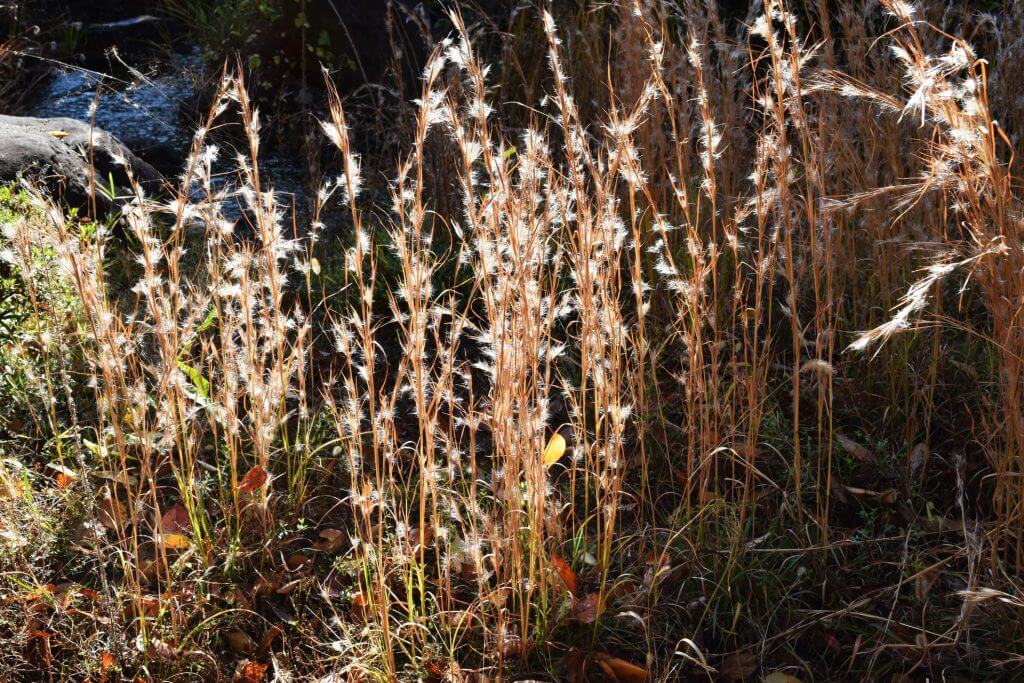 Broom sedge prefers sun to part sun and prefers well drained soil.  It is native to dry, sandy, and disturbed areas.  Growing 1′-3′ high and forming a clump about a foot wide, its seed heads  are abundant and airy.

The sheer number of insects that thrive along with grasses is amazing, not to mention the amazing names we’ve given to the insects. Broom Sedge supports leafhoppers, piglet bugs, scale insects, leaf beetles, the Destructive Billbug, the cobweb skipper, and the Carolina Grasshopper. It provides shelter for various insects during the winter, as well as cover and nesting habitat for the Bobwhite Quail, Greater Prairie Chicken, and other wildlife. Birds eating the seeds of Broom Sedge during the winter include the Slate-Colored Junco, Field Sparrow, and Tree Sparrow.

Now Open Monday-Saturday 9-4. Your safety is our first concern!  Remote ordering still available. Plant trees or shrubs now — It is safe to plant in summer.  Just keep the plants watered. Large selection of trees and perennials.  Trees are in containers and easily transported by car.

You can view the signage for most of our plants here!

Our mailperson loves the color of our yard, which is filled with native plants.