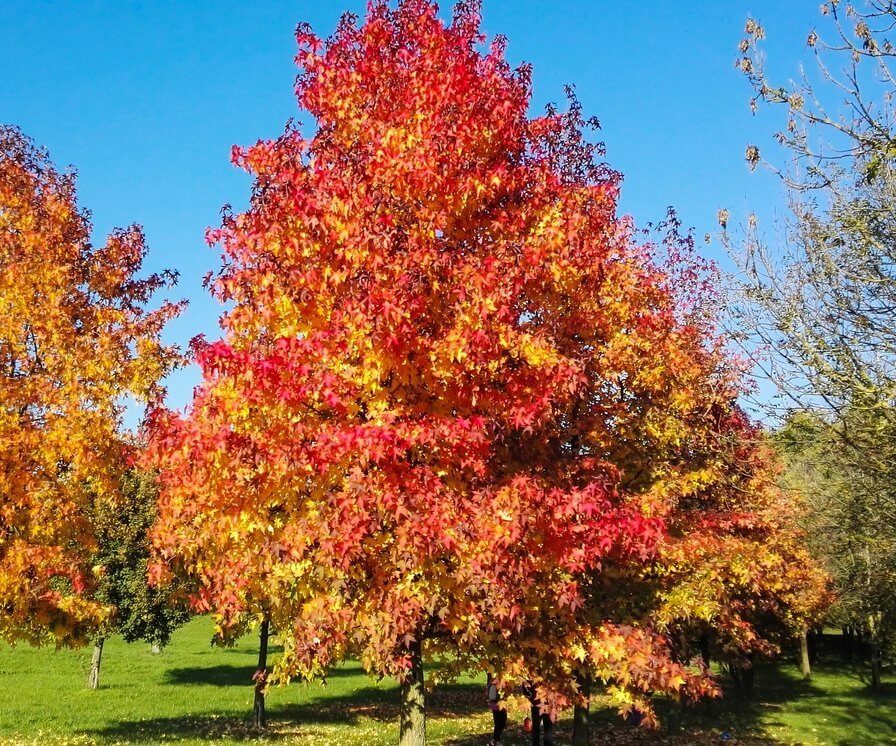 The Sweet Gum, Liquidambar styraciflua, is a medium-sized, deciduous tree native to the eastern and south-central United States, extending south into Mexico and Central America. Its range in the United States extends from south-eastern Connecticut, New Jersey, and southeastern Pennsylvania south to Florida and east to eastern Texas. It usually grows in lowlands and valleys, and is absent from most of the Appalachian Mountains.

Sweet Gums generally grow 60 to 80 feet tall at maturity, with a spread of 40 to 60 feet. Some specimens have been recorded growing over 120 feet tall, although this is uncommon.

While often a nice pyramidal shaped tree when younger, eventually the tree grows to have a full, rounded crown atop a straight trunk. It grows at a medium to fast growth rate, sometimes growing more than 24 inches in a season.

The foliage is ornamental, with heavily lobed, star-shaped leaves that are reminiscent of maples. They turn a spectacular deep burgundy red, gold, and purple in fall. We consider the sweetgum to have some of the prettiest and most dependable fall color!

The bark is rather interesting, especially visible in winter when the tree is dormant. On twigs and smaller branches, unique corky ridges rise from the surface. The species is well-known for its “gum balls”, which remain on the tree throughout the winter and fall in early spring. These balls are the fruits containing the seed. The tree starts producing seed balls at about 25 years old.

This tree makes an excellent shade tree and even street tree if the road margins are wide enough to support its width.

It is an adaptable species, often being successful in a variety of soil conditions. It prefers moist, well-drained, slightly acidic, and rich/fertile soils, but can be grown in average soils, including those with clay. Avoid overly alkaline and very dry soils, as the tree appreciates moisture throughout the season.

Full sun is necessary, as this species is intolerant of shade. This species has been used for a variety of purposes including timber for furniture and flooring, as well as products made from its sweet sap (or “gum”) such as perfumes, adhesives, incense, and chewing gum! This sweet sap is of course how the tree got its name.

Many birds, such as mourning doves, finches, quail, and turkey, Eastern Towhee, Carolina Chickadee, Slate-Colored Junco, and White-Throated Sparrow feed on the seed of Sweet Gum, as do small mammals such as chipmunks and squirrels. The Luna moth is a notable species among many moth species that use the Sweet Gum as a larval host plant.

Sweet Gum does not support quite as many insects as some other native trees, and fossil records seem to indicate that it was more prevalent in the past than it is today.  This leaves it wide-open to the imagination as to what creatures from the past may have relied on Sweet Gum.

It still plays an important role in the ecosystem and provides among the best ornamental fall color around.  Plant one today!

I have never have seen such a sharp focus on the plant stock that all Pennsylvanians should be growing. Kudos to Edge of the Woods!