The Yellow Birch, Betula alleghaniensis, is a large birch species which occurs from Minnesota, east to Maine, and extending south along the Appalachian Mountains to Northern Georgia. Its range also includes the southern end of several Eastern Canadian provinces. It is most often found growing at higher altitude, northern facing mountain sides and open ridge tops. Generally it is found growing among other deciduous species such as maples, beech, and cherry, or can be found growing in large, pure stands.     Photo Credit for photo above:  “Betula alleghaniensis” (CC BY-SA 2.0) by Plant Image Library

The species usually grows 50 to 80 feet tall but may grow over 100 feet tall. Its form tends to be a large, rounded crown and a strong single trunk, often with low branches and deep crotches if grown in an open space.

In a woodland stand, the tree is tall and narrow with little to no low branching. Its bark is smooth and yellowish-caramel colored when young, but as it ages begins to peel and curl. It is one of the longest-living birches, easily living up to and over 100 years; some old specimens have been dated at nearly 300 years old. 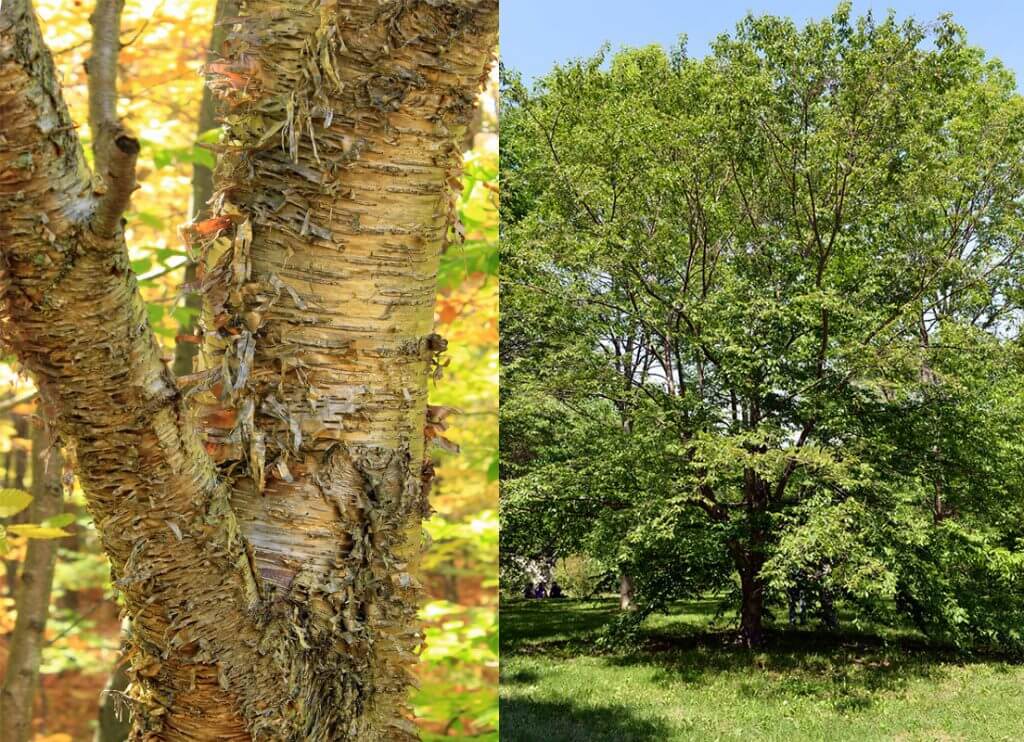 The Yellow Birch, like other birches, blooms in very early spring, before the leaf buds expand. The catkins (flowers) dangle from the tree until the seed ripen and are dispersed by strong winds and animals. The yellow birch is not hard to grow, but will become stressed if planted in an area with too much sun and too little moisture, they seem to do best when planted a north-facing exposure, but will tolerate any exposure as long as soil does not become too dry during the hottest times of the year.

It is, however, more heat tolerant than the Paper Birch (B. papyrifera), which notoriously defoliates in hot dry summers. The yellow birch should be grown in average to rich, moist soils; having lower growing plants to cover the ground around it can help conserve moisture and keep its roots cool. Young trees should be caged to protect against deer browse and buck rubs.

The yellow birch has value for several birds and mammals, many of which consume the seeds from the catkins. Ruffed grouse will eat the seed as well as buds in late winter or early spring; and squirrels will collect the catkins and store the seeds for future consumption. Siskins, chickadees, and redpolls readily feed on birch seed, and yellow-bellied sapsuckers will feed on the tree in the summer. The yellow birch is also a larval host for the banded purple and white admiral butterflies.