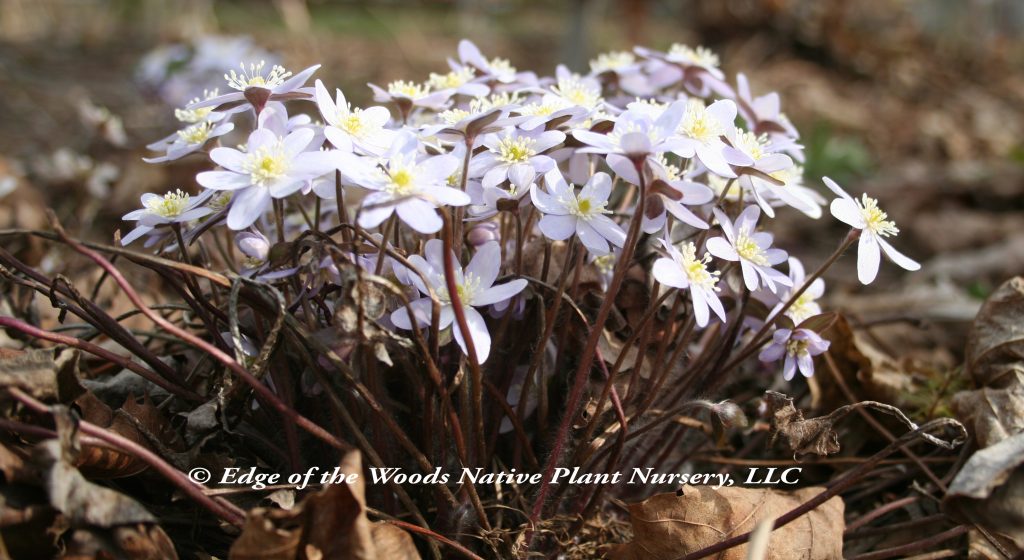 What are Spring Ephemerals?

After a long winter, gardeners are eager to get out of their houses and into their gardens.  If you wander out into the stark, tawny woodlands of early spring, you will see little shoots and delicate blossoms emerging.  These dainty plants often grow in beds of moss and leaf litter where larger plants will not easily crowd them.  Known as spring ephemeral plants, they are the first plants to pop up in spring and the first to flower. They emerge early to take advantage of the sunlight that penetrates the bare branches of the deciduous woodland.

Some familiar spring ephemerals are the classic Eurasian species — tulips, daffodils, crocuses, hyacinths, and grape hyacinth.  They emerge in early spring, flower, and die back to dormancy by early to mid-summer. Underground lies a bulb, corm, or other storage organ that patiently waits for next year to start the process over again. These species are popular and easy to grow, but they are only a few of the many species available and none of them are native.

In eastern North America, where hardwood-deciduous forests once dominated the landscape, a beautiful bounty of ephemerals abound!

One of the first spring blooming ephemerals is yellow trout lily (Erythronium americanum), a 4”-6” tall plant with a few spotted leaves and sweet scented, nodding yellow blossoms that resemble miniature lily blooms. Trout lilies are often found near streams in moist soils. Their unique bulbs use strong roots to pull themselves deeper into the soil over time, and send out rhizomes to colonize large areas.

One of the few native blue perennials is Virginia bluebells (Mertensia virginica). Their large, soft-green leaves and bright blue flowers appear in early-mid spring.  They are luscious looking, but wither away by summer. Bluebells pair beautifully with plants like wild bleeding heart (Dicentra eximia) and native ferns, which fill in the gaps after they’ve gone dormant in summer.

Eastern shooting star (Dodecatheon meadia) is a bulbous plant with an umbel of white blossoms similar to nightshade blooms.  Its blossoms are larger than those of nightshades, and hang downwards. Today, many botanical taxonomists recognize shooting stars as a species of primrose, in the genus Primula.

Jack-in-the-pulpit (Arisaema triphyllum) is one of our most unusual ephemerals.  It sports a striped, green pitcher-like flower that can be compared to that of a calla lily. By summer, this gives way to a cluster of red berries on a dried stalk.  ‘Jacks’ are dioecious, having male and female flowers on separate plants. So, some are actually ‘Jills’!  Only the female plants produce berries.  Jacks can turn into Jills, and vice versa.  They change sex depending on the dynamics of their own population.  They are a really fun plant to have in your garden if you have the right spot!

Mayapple (Podophyllum peltatum) is another rhizomatous woodland ephemeral.  It can spread to form large colonies in moist, shaded gardens. Mayapples have deeply lobed, glossy leaves and white blooms under their leaves that lead way to a small fruit like a tiny apple. A variety of wildlife feeds on the ripe fruit, including some human-foragers

Virginia Spring Beauty (Claytonia virginica) and sharp-lobed hepatica (Hepatica acutiloba) both feature small, pink flowers in early spring and are perfect additions to rock gardens.   Rue anemone (Thalictrum thalictroides) is a long-blooming ephemeral; among the earliest to start blooming but often still blooming well into early June; its white flowers stand atop of 6-9” stems with dainty leaves that flutter in light breezes.

Trilliums, perhaps some of the most valued and sought-after native spring ephemerals, vary in color from red (Trillium erectum) to white (Trillium grandiflorum) and even yellow (Trillium luteum). They are the all-stars of the spring ephemerals, featuring three colorful petals atop beautifully arranged leaves. They prefer slightly acidic soils and a shady spot in the garden.

A popular spring ephemeral for foragers and wild-food enthusiasts are wild ramps (Allium tricoccum). These wild onions look similar to small leeks, with broad flat leaves. They sprout in early spring. The leaves die back in late spring, followed by a short blooming period. A scape (flower stalk) emerges after the leaves begin to die back.  A small umbel of white blossoms opens.

Bloodroot’s (Sanguinaria canadensis) large white blossoms with yellow centers are reminiscent of  garden anemones. It spreads by underground rhizomes and can form colonies. It is especially useful under deciduous trees, or tucked in with shorter perennials that fill in after the bloodroot goes dormant.

Sundial lupine (Lupinus perennis) is sometimes considered a summer ephemeral because of its later bloom period. It blooms in late spring/early summer and fades away by mid-summer.  This beautiful, small species of lupine with lavender-blue flowers is a legume and nitrogen fixer.  It can thrive in  poor soils with excellent drainage and can be found in dry and rocky environments such as steep banks or barrens.

Please note, our availability constantly changes throughout the season. We often only have limited numbers of spring ephemerals, and do not have every species every season due to their slow rate of production. Please contact us, or check out our availability on our website to see what we have!

Check out the other parts of our Thinking of Spring series:

Thinking of Spring (Part 2): The ecological role of Spring Ephemerals

Thinking of Spring (Part 3): Using Spring Ephemerals in your Garden.

I always enjoy shopping at your nursery. Everyone is friendly and helpful!